There is a special place in hell for certain people...
A place where they will be savaged for all eternity...

"Bags of garbage covered the floors of 6 Union St. Cockroaches scurried about, and soiled diapers littered the home. Upstairs, a 5-year-old boy suffering from Down syndrome lay in a bedroom unable to speak or stand, Nichols said. Lice covered his body, and he sat in diapers full of his own waste."

KABUL, Afghanistan (AP) -- Senior Muslim clerics are demanding that an Afghan man on trial for converting from Islam to Christianity be executed, warning that if the government caves in to Western pressure and frees him, they will incite people to "pull him into pieces."

"Rejecting Islam is insulting God. We will not allow God to be humiliated. This man must die," said cleric Abdul Raoulf, who is considered a moderate and was jailed three times for opposing the Taliban before the hard-line regime was ousted in 2001.

But three Sunni preachers and a Shiite one interviewed by The Associated Press in four of Kabul's most popular mosques said they do not believe Rahman is insane.

"He is not crazy. He went in front of the media and confessed to being a Christian," said Hamidullah, chief cleric at Haji Yacob Mosque. "The government is scared of the international community. But the people will kill him if he is freed."

"Cut off his head!" he exclaimed, sitting in a courtyard outside Herati Mosque. "We will call on the people to pull him into pieces so there's nothing left."

He said the only way for Rahman to survive would be for him to go into exile.

But Said Mirhossain Nasri, the top cleric at Hossainia Mosque, one of the largest Shiite places of worship in Kabul, said Rahman must not be allowed to leave the country.

"If he is allowed to live in the West, then others will claim to be Christian so they can, too," he said. "We must set an example. ... He must be hanged."

Islam is a Death Cult. Their 'faithful' are only 'faithful' on pain of death.

What is so lacking in Islam, that the 'threat of death' is required to keep the faithful?

These clerics are so fearful of losing their personal power. That is why they are demanding death for this Christian. Very barbaric of them.

Justice Souter, Justice Steven, Justice Kennedy, Justice Ginsburg, Justice Breyer...
The same 5 who took away our property rights last year .. Now, are blocking searches.
So let me get this straight.
Your home is your castle when it comes to hiding criminal activity.
Your home is not yours when the state wants to increase the tax base.
Posted by Marvin at 3/23/2006 11:22:00 AM No comments: Links to this post

"We have, after all, lived our whole national history with an understanding of the ancient adage that a man's home is his castle," Justice Souter said.
Except when the almighty socialist state wants it.
Damn, if only Justice Souter could have made this quote a year ago.
Posted by Marvin at 3/23/2006 11:19:00 AM No comments: Links to this post

She told an audience of immigrant leaders in New York that Republicans would have criminalized the Good Samaritan and probably Jesus as well:

Accusing Republicans of betraying family values, Senator Clinton said a House immigration bill would turn "probably even Jesus himself" into a criminal

Hmm, guess Senator Clinton never paid attention in Sunday school.
Jesus was never an illegal immigrant or even an immigrant, according to the Bible and other historical records. He was born, lived, and died within the same country.
Posted by Marvin at 3/23/2006 08:21:00 AM No comments: Links to this post

The punchline of Ann Coulter's column

Despite the fact that polls show the public is ready to throw in the towel on Iraq, members of the House of Representatives, or "the people's house," recently voted 403-3 against withdrawing the troops.

Despite the fact that 70 percent of the public thinks Bush is doing a lousy job, when they had a chance to put someone else in the White House a mere 15 months ago, they decided to keep him.

There is, however, one poll taken by millions of Americans every day, year in, year out. Based on plummeting viewers, circulation numbers and ad rates, we can say with some certainty, the American people are beginning to loathe the liberal media.

* 1775, Patrick Henry made his famous call for American independence from Britain, telling the Virginia Provincial Convention, "I know not what course others may take, but as for me, give me liberty, or give me death!"

Ahh, the ironies of history.

The irresponsible Senator from Nevada. Reid the man without a plan (or clue).

Reid should listen to Senator Lieberman. Iraq is improving.

Senator Reid -  instead of pandering to a radical base which can not bring about a Democratic majority, you need to create a plan, share a vision for improving this nation and the world.

Senator Reid - the most irresponsible, dangerous, incompetent thing the US could do; is to withdraw our troops from Iraq before their forces are ready to maintain order throughout the country.

Read the entire essay at the Sammenhold Blog -

We Stand With the Danes

In 1943, right in the thick of World War II, the occupying Nazi-controlled goverment of Denmark resolved to exterminate Denmark's Jewish population. Owing to the courage of the Danishpeople, who stood in solidarity with their Jewish neighbors, the Danish Jews disappeared overnight, hidden by their neighbors from the Nazis' view, despite the grave risk to all involved. Once their complicity was uncovered, many of the rescuers paid the ultimate price. Later, Israel would award members of the movement who arranged the rescue the honor Righteous Among the Nations. At their own request, the rescuers are officially recognized, in solidarity, as a collective group. The Danish have a word for it: The word is SAMMENHOLD.

For our part, we stand with the Danes.

We invite you to stand with us.

The Washington Post has a conservative voice at the Red America Blog. Since, half the country votes conservative, this is an excellent decision.

From Chicago Tribune
h/t Michelle Malkin
Rahman faces death for converting to Christianity.
This case exposes problems with the Afgan Constitution..it has a clause which supports Islamic law, and a clause which supports the UN Charter.
Islamic Law says death to any who convert from Islam.
UN Charter allows for freedom of religion, including the right to change religions.
Rahman choose to return to Afganistan.
Rahman choose to make an issue out of his religion.
Rahman wishes to be a Christian Martyr.
His wish will be granted, Islam the Death Cult demands it.
Rahman is a brave man to die for his beliefs.
The background from the Chicago Tribune:

Rahman left Afghanistan shortly after the birth of his daughters, now 12 and 13. He and his wife divorced. While overseas, Rahman converted to Christianity. He returned to Afghanistan about three years ago and moved back in with his father and daughters. He left for months at a time, working at a restaurant or as a security guard.

He stayed with cousins, who asked him to leave after he said he was a Christian. Eventually, Rahman moved back with his father.

He complained about Rahman's behavior to local police, but did not mention his religious conversion. At first, police asked the family to try to resolve its own problems. Then in early February, Rahman showed up at the police station and complained about how his family treated him. While there, he announced he had become a Christian.

Police said they had no choice except sending the case to central police command.

"We knew he had converted, but we didn't want to get involved in religious issues," said Col. Abdul Mohammed, the deputy commander of the police district. "So we filed a report on the family's problems to send to the central police. And he insisted over and over, `Please write in my file that I converted to Christianity.'"

On Thursday, the first day of the trial, Rahman appeared in court with no lawyer. Prosecutor Abdul Wasi said Rahman had been told repeatedly to repent and come back to Islam, but Rahman refused. Wasi called Rahman a traitor.

Morale appears to be outstanding. That's not to say these Marine men and women prefer being here rather than home, but repeated conversations with Marines at every level lead you to one conclusion: they are committed to the job. And what a job it is.

I have to suffer listening to PBS, to please my bride.

"All Things Considered" started with a 15 minute attack on President Bush.
They discussed his speech in Cleveland.
They talked about the unscripted questions from the audience.
They play the tape of a very difficult and pointed question - Then INSTEAD of playing the President's answer, they EDITORIZED and told us what the Presdient said. They were criticial of his answer. BUT they never played the actual answer from the President.

Then they discussed the political situation in Ohio. According to them the Republicans have no chance at all in Ohio.

Islam is a Death Cult

Islam is the only 'religion' which has the death penalty for converting out of the faith.
Does Islam offer so little that it requires force to keep the 'faithful'?
Or, is Islam really a cult which demand total submission?
Islamic nations censure what their citizens may see/read.
Why?
If Islam is so great,
why the fear of free thought,
why the fear of a free exchange of ideas.
Posted by Marvin at 3/20/2006 09:01:00 AM 3 comments: Links to this post 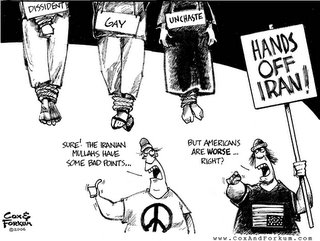