Led by Dread Pundit Bluto the Pirate Fleet sailed boldly into 'harm's way' - We went to DailyKos and directly challenged them to reasoned debate.

They didn't want our input into their debate.

Update II: Kos moderators are busily deleting comments from the Buccaneers now, signaling Victory Conditions for the Armada, and prompting this question from a Kos regular: 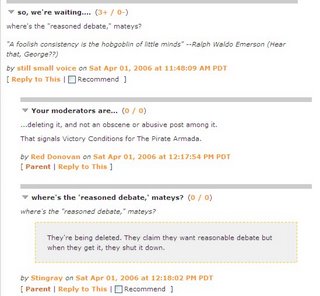 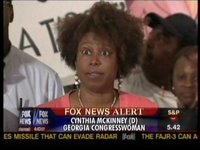 Sadly, there are only 14 black women Members of Congress. And surely our faces are distinguishable. But why my face is continually unrecognizable can only be answered by these offending police officers. Capitol Hill Police are given face recognition instructions as a part of their official training. Capitol Hill Police are required to recognize, greet, and distinguish Members of Congress as a part of their official role and responsibilities. In fact, according to the US Capitol Police, their mission is to protect and support the Congress in meeting its Constitutional responsibilities. The US Capitol Police mission statement makes no distinction about selective application of its mission depending upon whether a Member of Congress is black, woman, or has a new hairstyle.
But, honestly, this incident is not about wearing a Congressional pin or changing my hairstyle.

Also, Cynthia - You should respect those officers, whose job it is to protect your sorry self, enough to co-operate with them. You, as a Member of Congress, are not a 'higher being' who can simply ignore the 'little people' who work so hard to make your life so easy.

Cynthia, your actions have shamed the people of the great state of Georgia, once again.
The 'race card' only highlights the ignorance of the person playing it.

In the aftermath of the terror attacks on the World Trade Center and the Pentagon, many Americans were “out for blood.” While Cynthia McKinney shared the desire to see justice done, she also stood before Congress and called on the American people to reflect upon the root causes of our enemies' desperation.

We must honestly ask ourselves what is the root cause of this war being waged on our people and our country. I suspect that we will need to look at altering some of our foreign policy positions in some parts of the world. Unless we do this I fear that a military campaign, unsupported by sound foreign policy strategies, will only cause immeasurable civilian suffering throughout the world and may well actually lead to more terrifying attacks upon our cities and our citizenry.

The Senators up for re-election this year:

Those who I think are locks to be re-elected [safe]

Those who are endangered [toss]

The 4 removals which would be great [wishlist]

Cantwell is a toss up because the Democrats stole the Governors office in 2004.

DeWine is toss up because the Republicans have many scandals in .

Santorum and Sarbanes are simply in tight races.

Santorum may be helped by Lynn Swann’s bid for Governor.

DeWine may be helped by Ken Blackwell’s bid for Governor.

Sarbanes may be defeated by Michael Steele.

I doubt if the overall compostion of the Senate will change (Democrat/Republican).

But the possibility of adding two African-American Republicans to the Senate is exciting.

In the strategy, Democrats vowed to provide U.S. agents with the resources to "eliminate" Osama bin Laden and ensure a "responsible redeployment of U.S. forces" from Iraq in 2006.
.....
Democrats also do not set a deadline for when all of the 132,000 American troops now in Iraq should be withdrawn.
They say: "We will ensure 2006 is a year of significant transition to full Iraqi sovereignty, with the Iraqis assuming primary responsibility for security and governing their country and with the responsible redeployment of U.S. forces."
The latest in a series of party policy statements for 2006, the Democrats' national security platform comes seven months before voters decide who will control the House and Senate.

Okay, let's see.
The White House will remain Republican at least till Jan 2009;

(Let's do some math. It takes 67 Senators to remove a President from Office;
currently there are 45 Democrats/55 Republicans;
up for election in 2006 - 18 Democrats/15 Republicans;
Worst case: cleans sweep by Democrats - gives you 60 Democrats/40 Republicans;
Democrats can not remove Pres. Bush from office without Republican help.)

The House and Senate will remain controlled by Republicans at least until Jan 2007.

Good. What better time for CAIR and other Muslim leaders to step up, cut through the politically correct fog and provide factual answers to the questions that give so many non-Muslims pause?

Generally speaking, those questions focus on whether the Quran does indeed promote violence against non-Muslims, and how many of the terrorists' ideas — about the violent jihad, the self-immolation, the kidnappings, even the beheadings — come right out of the text? But even more specifically:

Is Islam the only religion with a doctrine, theology and legal system that mandates warfare against unbelievers?

Is it true that 26 chapters of the Quran deal with jihad, a fight able-bodied believers are obligated to join (Surah 2:216), and that the text orders Muslims to "instill terror into the hearts of the unbeliever" and to "smite above their necks" (8:12)?

Is the "test" of loyalty to Allah not good acts or faith in general, but martyrdom that results from fighting unbelievers (47:4) — the only assurance of salvation in Islam (4:74; 9:111)?

I'll help with the answers: "Islam is a Death Cult."

Two fish, small fish store in England.
Both just found to have Arabic on them.
I doubt if this is real.

And they are found just as Afganistan is considering killing a Christian.

Islamic Threat is Greater than the Nazi or Soviet Threat

from Townhall
Dennis Prager is correct when he writes:

Only four types of individuals can deny the threat to civilization posed by the violence-supporting segment of Islam: the willfully naive, America-haters, Jew-haters and those afraid to confront evil.

Anyone else sees the contemporary reality -- the genocidal Islamic regime in Sudan; the widespread Muslim theological and emotional support for the killing of a Muslim who converts to another religion; the absence of freedom in Muslim-majority countries; the widespread support for Palestinians who randomly murder Israelis; the primitive state in which women are kept in many Muslim countries; the celebration of death; the "honor killings" of daughters; and so much else that is terrible in significant parts of the Muslim world -- knows that civilized humanity has a new evil to fight.

Just as previous generations had to fight Nazism, communism and fascism, our generation has to confront militant Islam.

How to be a Good Liberal - without dying.

18 WAYS TO BE A GOOD LIBERAL

1. You have to be against capital punishment, but support abortion on demand

2. You have to believe that businesses create oppression and  governments create prosperity.

Legal ethics expert Stephen Gillers tells Newsweek that Scalia's latest comments may be part of a problem -- quack, quack! -- that's bigger than the question of recusal. "As these things mount," Gillers says, "a legitimate question could be asked about whether he is compromising the credibility of the court."

So Scalia should recluse himself for repeating his decision from earlier cases because that undermines the cresibility of the court, but Ginsberg is allowed/encouraged to undermine the foreign policy of the United States of America, without underming the court's credibility.

Daveed Gartenstein-Ross has an excellent column up at the Weekly Standard on this topic. Titled "Free to Dissent", Daveed argues that Scalia should refrain from recusal in this case, as the circumstances differ from Newdow: At first blush, Justice Scalia's latest remarks seem like an even more compelling cause for recusal. While his remarks about the pledge occurred before the case was on the Supreme Court's docket, here the court was scheduled to hear arguments less than a month after the Freiburg speech. But a closer examination reveals that there is more than meets the eye: Scalia's remarks don't put forward anything different from the views he already articulated in two published opinions, a dissent in Rasul v. Bush and another dissent in Hamdi v. Rumsfeld. And that fact makes all the difference. ...

Supreme Court Justice Ruth Ginsburg gave a speech in South Africa last month, which, for some reason, is just now being publicized. Ginsburg's speech was titled "A Decent Respect for the Opinions of [Human]kind." In it, Ginsburg argued explicitly for the relevance of foreign law and court decisions to interpretation of the American Constitution. Ginsburg did not try to hide the partisan nature of this issue; at one point, she referred to "the perspective I share with four of my current colleagues," and she specifically criticized Justice Antonin Scalia, Judge Richard Posner, and the two bills that were introduced in Congress in 2004 and were broadly supported by Republicans. And she indulged in an outrageous bit of demagoguery, suggesting that those who disagree with her are somehow aligned with Justice Taney's infamous defense of slavery in the Dred Scott case. 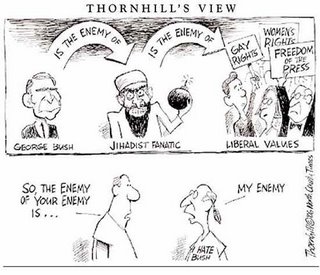