The Court expressly declared that it was not questioning the government's power to hold Salim Ahmed Hamdan "for the duration of active hostilities" to prevent harm to innocent civilians. But, it said, "in undertaking to try Hamdan and subject him to criminal punishment, the Executive is bound to comply with the Rule of Law that prevails in this jurisdiction."

So if they try him, they have to take him to federal court — but they don't have to try him? What?

1) US Supreme Court again sez we can hold these folks.
2) US Supreme Court sez that a Military Commision is not the proper forum to try them for war crimes.
The US can Court-Martial them.
or Just continue to detain them.
UPDATE - Blogs of War has excellent summary of blogshere reaction to this ruling.
Posted by Marvin at 6/29/2006 10:49:00 AM No comments: Links to this post

Q Does the United States support what Israel is doing in Gaza?

MR. SNOW: Let me be -- I'm going to be very precise on this, because, as you know, these things are reported carefully. The hostage-taking and the attacks by Hamas last weekend have precipitated the current events in Gaza. As we have said since the attack, Hamas should release and return the kidnapped Israeli soldier immediately. It's the responsibility of the Palestinian Authority to stop all acts of violence and terror. Hamas has done the opposite: It's been complicit in perpetrating violence, terror and hostage-taking. Israel has the right to defend itself and the lives of its citizens. In any actions the government of Israel may undertake, the United States urges that it ensures that innocent civilians are not harmed, and also that it avoid the unnecessary destruction of property and infrastructure. All parties ought to take every measure to restore the security situation in Gaza.

Q And do we think that the Israeli response has been appropriate and within the limits that you're talking about?

MR. SNOW: I'm not going to characterize further than what I've told you. There's your statement of position.

Q But, Tony, the Israelis have bombed a power plant -- that harms innocent civilians. Haven't they, like, clearly gone beyond what you've just described here?

MR. SNOW: Again, I'm not going to get into operational details here. Let's just point out once again, you have the Israeli -- the Israeli forces are trying to reclaim somebody who is kidnapped and is being held hostage in Gaza, and they are doing what they can to return him. It would be a lot easier if the Palestinian Authority and if Hamas simply returned the kidnapped soldier. I am not going to get into rendering judgment on any of the operational details of what's going on there.

Q Palestinian leaders have called this "collective punishment." Is it, or isn't it?

MR. SNOW: Again, I will just simply refer to it. I'm not going to get into the midst of the characterizations. I'll repeat, the Palestinian Authority could make this very simple -- they could return the kidnapped soldier. And the most important thing is to try to restore some semblance of security as rapidly as possible, and we hope both sides will cooperate in that.

This Daily Kos commentator is relieved:

I was hoping he would be found dead

I don't mean to sound callous, but I'm relieved.  The Israelis were preparing to kill thousands of innocent Palestinian civilians through denial of electricity, water and emergency aid through their invasion of Gaza.  At least now there is hope that they will allow water and emergency services to be restored.

I hate to say it, but this [the murder of Eliyahu Asheri- ed.] was the best outcome we could hope for in this disasterous situation.

I cannot even comprehend the moral bankruptcy.

Need for this War

There needs to be some clarity. For too long the Palestinians have been protected from the natural consequences of their own brutality and bloody-mindedness, allowed by the Western world to make war while pretending at peace. This has only infantilized them, shielding them from the rightful consequences of their actions, encouraging them to become more vicious.

At some point there has to be a war to resolve this, a real war, with the other side fighting back. And one side needs to be decimated and humilated. That's how peace is made. Only when people truly feel the horrors of war are they willing to give it up.

The NY Times Editorial entitled Hamas Provokes a Fight
Blames the
Palestinians for the current war in Gaza.
Posted by Marvin at 6/29/2006 07:33:00 AM No comments: Links to this post

Around the world with bloggers,
I go to an Israeli site to find a link to Opinion Journal
editorial entitled:
Stop Terror at Its Source
A return to targeted killing might improve Israeli security.

The Israeli Army has moved into Gaza. By the reports I've seen, they have killed 0 (zero), wounded 0 (zero), detained 3 (three, who were later released)

The Israeli Army warned the airport security personnel to leave, they did.

The Israeli Army is warning civilians in certain areas, hopefully the civilians will follow the instructions and stay safe.

Palestinians have captured 3 (three). [a soldier, a settler, and an old man]
One Palestinian family suffered injuries (maybe death) from a grenade they were playing with.

UPDATE to my rant:

A quote from Vital Perspective:

First, Israel is acting in self defense after months of rocket attacks terrorizing its population. Second, terrorists control the Palestinian Authority, and have brazenly endorsed the kidnapping. Third, while Mahmoud Abbas may be the elected President, his inability to bring about the release of the solider, or an end to the rocket attacks, has forced Israel to finally act on its own. We don't know of any other country that would do otherwise.

The solution to the Israeli-Palestinian conflict is simple:

The rest of the world should shut up and allow the Israelis and Palestinians to settle their differences themselves.

The European plan of appeasement - only encourages more, not less, more attacks on innocent civilians.

The Arab Nations do not care about the Palestinians - Do they provide anything to them? Or do they allow the Europeans to provide for them?

If the rest of the world - steps back and allows Israel and the Palestinians to work out a solution on their own, it will be a lasting solution. But the constant desire to appease the thugs, I mean Palestinian leaders, only causes more bloodshed.

The Israeli military has bombed a couple of bridges to prevent north/south movement in Gaza. The Israeli Army is moving to rescue its captured soldier.

I hope the Israeli government does not listen to the terrorist appeasers in Europe.

Appeasement does not work.

Must deal with terrorists by using determined and sustained force of arms.

The Dread Pundit Bluto: The Pirate Armada Vs. The New York Times

The Dread Pundit Bluto: The Pirate Armada Vs. The New York Times

IKE and the media

In 1943, after a sucessful North African campaign and before the invasion of Sicily. The 'Greatest Generation of Reporters' did their level best to help the Allies win the war.

In order to stop speculation in the press which was helping the Axis, in 1943 General Eisenhower gave a press briefing confirming to the reporters in the American press that Sicily was the next target of allied invasion. He explained to them that if they printed it, it would result in the deaths of many American and allied soldiers. Not one reporter said a word, even to their superiors in the newsroom. The invasion of Sicily was a whirlwind success, capturing the island in less than forty days, and many papers were sold reporting the successes.

Just in:
according to Michelle Malkin and several other sources.
Rep Murtha, D-PA, told Bill Keller to publish, or atleast he did not discourage the publication of the Times story about tracking terror finances.
We have a Congressman providing material support to terrorists.
Will the Department of Justice do anything to stop this?
Will the President - act to protect this nation.
Posted by Marvin at 6/27/2006 08:02:00 AM No comments: Links to this post

Bill Keller has decided to assume responsiblity for the security of the United States of America.
He has decided that he is smarter than our elected officials (maybe he is).
He has decided that the NYT has better sources of information than the US Government (doubtful).
Bill Keller has repeatedly undermined the security of the USA. This is his way of providing 'Material Support to Terrorists' - for that the NYT should be closed, since it is a terrorist organization.
Bill Keller should be charged with murder for each person killed by terror attacks.
Posted by Marvin at 6/27/2006 07:30:00 AM No comments: Links to this post

The government needs to take strong action against those who "provide material support to terrorists". The NYT needs to be shut down due to their support of terrorism.
Posted by Marvin at 6/26/2006 09:30:00 PM No comments: Links to this post 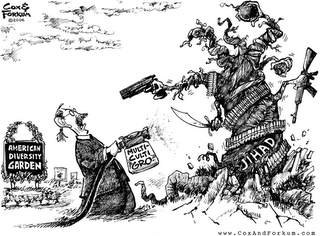 Their real aim is not religious respect but cultural change in the West. They want to prevent criticism of its Muslim minority and accord that group special privilege not available to the faithful of other religions. Instead of them changing to integrate into our way of life, they want to force us to change to accept their way of life.

Go read the whole thing at Cox and Forkum

On that date, 2996 innocent people died.